“In Iraq, I promised you a bed of rose petals.” He grabbed my hand under the table, tightening his grip as if he were falling from a precipice and our connection was the only thing saving him from certain death.

“You smell like apples. Roses were wrong.” There was nothing soft about his tone, but his quiet words were for me alone. “I want everything to be right for you.”

I caught his gaze and held it. He was confident. Arrogant. Sure he had a place in the world. And under that was the man who needed me to be that place.

“If I could…” He smiled and shook his head at a silly thought he wanted to dismiss but couldn’t—a contradiction in keeping with the whole man I married. “If I could write my love in the sky, it wouldn’t be big enough. I’d run out of room. I’d fall out of the air trying to say it all.”

He was saying it all.

And he was falling out of the sky to do it.

On the Edge, the next intense installment in The Edge Series from New York Times bestselling author CD Reiss, is available now!

On The Edge is the second book in The Edge series and by far the most gripping.  This is a series that must be read in order. The first book, Rough Edge, left me spinning with speculation and eager to understand what made Caden tick. This time, I was left suspended and in a heightened state of awareness.

With chapters presented in alternate point of views, I found each one resonated deeply, where I became engrossed with the sense I had exclusivity to the innermost secrets of the main persons depicted in this story. Their struggles, both physical and emotional, elevated my experience to that of a witness rather than a reader.

I was human, fallible and imperfect, but I was dedicated.

Greyson and Caden are still trying to adjust to civilian life, debating d what the effect of life before and after service has had on their sanity. Both are battling the temptation to lean on their professional expertise rather than seek treatment. The delicate balance between a healthy relationship and one they crave was blurred from the beginning.

I delighted in the different angles Ms Reiss shines on their relationship. The question of entitlement, deception and honesty among other issues are laid out for consideration. This built empathy but also left me unsure as to what direction the story will take.

The medical references and explanations continue to feed my curiosity. They have reeled me in and each time I’ve checked on a reference it has been in context with the scene. I lost count of the number of times I highlighted a word or phrase, either because I wanted to go back and look it up or because it was quote worthy.

On The Edge left me gob-smacked with the bombshell dropped in the last chapter. While I am desperate to read on, the break between now and the next book is an opportunity to process and absorb Greyson and Caden’s story thus far. The writing is captivating and the language rich which, along with great characters, had me reaching for all the stars! 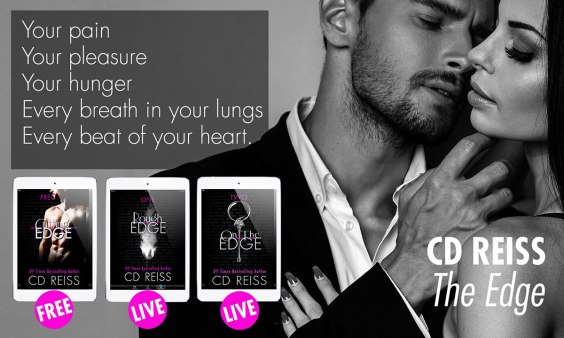 Read On the Edge Today!

CD Reiss is a New York Times bestseller. She still has to chop wood and carry water, which was buried in the fine print. Her lawyer is working it out with God but in the meantime, if you call and she doesn’t pick up she’s at the well hauling buckets.

Born in New York City, she moved to Hollywood, California to get her master’s degree in screenwriting from USC. In case you want to know, that went nowhere but it did give her a big enough ego to write novels.

She’s frequently referred to as the Shakespeare of Smut which is flattering but hasn’t ever gotten her out of chopping that cord of wood.

If you meet her in person, you should call her Christine.

An Angel with the devil inside… a Good Girl that can be bad or a Bad Girl trying to be good…who knows!

By a Thread by Lucy Score

Healing of the Wolf by Cherise Sinclair

In The Unlikely Event by L.J. Shen

Dancing in the Dark by T.L. Martin