Marriage and Murder by Penny Reid
Series: Solving for Pie: Cletus and Jenn Mysteries #2
Also in this series: Engagement and Espionage
Published by Cipher-Naught on March 2, 2021
Genres: Contemporary Romance
Pages: 347
Buy on AmazonBuy on Barnes & NobleBuy on Walmart/KoboBuy on Google PlayBuy on Apple Itunes
Goodreads
BookBub

The Devil is in the details . . .
Cletus Byron Winston wishes to marry Jennifer Anne Donner-Sylvester (aka The Banana Cake Queen) posthaste! He’s spent the last year wanting nothing more than for the celebrations to be brief, libations flowing, and BYOB (bring your own blueberries). His future mother-in-law has other plans, plans his intended has been willing to indulge, much to Cletus’s chagrin. Therefore, so must he. To a point. But truth be told, he wouldn’t mind if the meddlesome matriarch disappeared, at least until the nuptials are over.
On the night of Cletus and Jenn’s long-awaited engagement party, just when the surly schemer is of a mind to take matters into his own hands, a shocking event upends everyone’s best laid plans and sends the small hamlet of Green Valley into complete disarray. The final months leading up to Cletus and Jenn’s matrimonial bliss are plagued with chaos and uncertainty. Will Cletus and Jenn finally make it to the altar? Or will murder and mayhem derail their happily-ever-after?And most importantly, who done it?
‘Marriage and Murder’ is the second book in the cozy mystery series Solving for Pie: Cletus and Jenn Mysteries. It is best read after Winston Brothers #3, ‘Beard Science’ (which can be read as a standalone) and Solving for Pie: Cletus and Jenn Mysteries #1, ‘Engagement and Espionage.’

All the Winstons in all their family glory being there for each other in the best of ways.

All the sweetest romance you can handle and then some. Whoever thought Cletus wasn’t a romantic can eat dirt right this second.

I absolutely loved spending time with these people and I hope Ms. Reid never gets tired of writing about them. I can’t wait to go back and re-read Marriage and Murder to discover what I missed in the first frantic read and savor every single word of it. 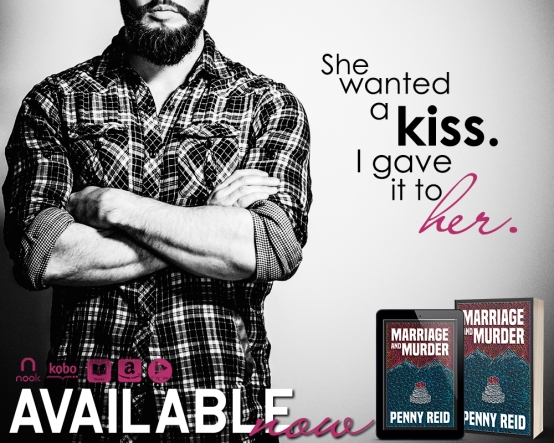 “Here.” Cletus suddenly appeared, looking devilishly handsome in the dim light and seemingly all put back together—like we’d been in here holding hands instead of. . . ANYWAY.

He held out my underwear. His eyes were bright even in shadow, and I could see they were half-lidded as they lazily trailed over me. He looked at me like he was hungry, and I was dinner. Despite all the encore orgasms I’d just had, the effect hit me right between my legs.

I wondered what he was thinking, watching as he licked his bottom lip and drew it into his mouth. Was he just as insatiable for me? And if so, was he okay with that?

Tearing my eyes away, I pulled on the lace and fixed my skirt, telling my body to settle down. We were getting married for hootenanny’s sake!

Cletus cocked his head to the side while I smoothed my hands down the red fabric, working to get a hold of all this raging want always coursing through my veins whenever he was near. Maybe it was because he was my first, and I guess, my only. Was that why I felt so crazed for him all the time?

I surmised he meant the dress. “Right? The wrinkles are hidden, if there are any. It’s ’cause they ruched the outer fabric at the seams, see?” I turned to the side to show him the seam, and he stepped forward as though he were going to investigate.

Instead, his hands cupped my face and tilted my chin back. He stared at me with a vibrant intensity I felt all the way to my fingertips. “No, Jenn. Not the dress. You.” Cletus gave me a soft kiss, ending it by gently nipping my bottom lip. “You are my miracle.”

I sighed. And I smiled. And I felt like I was walking on a cloud instead of in four-inch heels, which was also probably something of a miracle. “You say the sweetest things.”

“I think you mean, I say the truest things.”

I laughed, and he kissed my forehead. He held me there, in the dark with his lips pressed to my forehead. “I love you so completely, with every cell in my body. I wonder sometimes if I’d cease to exist—just evaporate or disappear—if anything ever happened to you.”

“No.” I anchored my hands to his wrists and squeezed. “Don’t think like that. We’ve got our whole lives in front of us. There’s nothing anyone can—”

Three bangs in quick succession pierced the quiet moment, and not a second later Cletus had me on the ground beneath him, covering my back with his body.

“Gunshots,” he whispered in my ear. “From the parking lot. Don’t move.”

Beard with Me by Penny Reid

Write Before Christmas by Julie Hammerle

The Mistletoe Trap by Cindi Madsen