For You, I Will by Fiona Davenport
Series: A Sex & Vows Novella #1
Published by Self-published on October 17th 2016
Genres: Contemporary Romance, Suspense
Pages: 107
Buy on Amazon
Goodreads

Isaac Harvey fell hard for his young client, Eden, the moment he met her. After helping her out of a jam that could have landed her behind bars, he wasted no time putting his ring on her finger.

Eden gave up hacking—mostly—for the title of wife and mother. After a year of negative pregnancy tests, she’s starting to become restless. But when Isaac takes on high-profile murder case, Eden dusts off her keyboard and dives in, ready to help.

What she uncovers is a conspiracy that is about more than just murder. With danger swirling around them, Eden and Isaac are forced to fight for their lives—and they discover there is nothing they wouldn’t do to protect their love.

We met Eden and Isaac in Brief Me, Baby as an established couple and I was more than eager to know how that had happened. In For You, I Will, while we get to know them better we don’t get the story about them becoming a couple. Well, we kind of do, all jammed packed in the prologue but I wish we’d gotten a more in-depth account of that part.

As it is, this was still a great story. Eden and Isaac first meet when he had to get her off hacking charges by 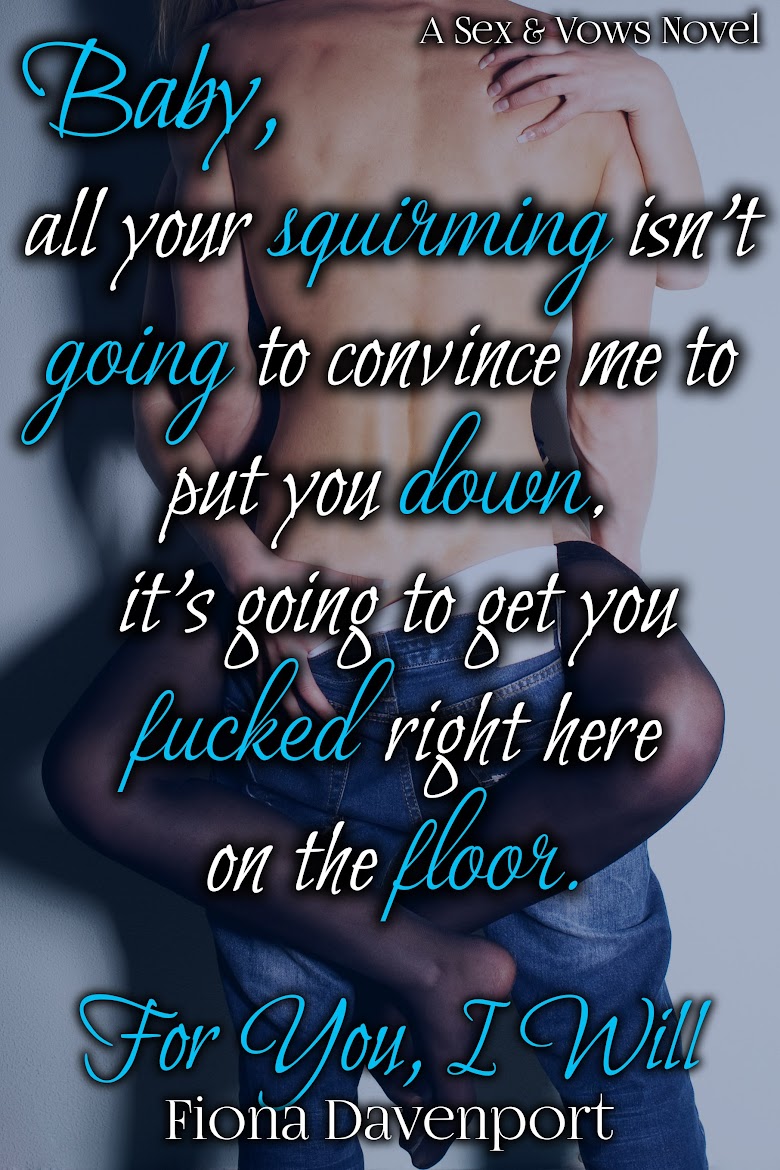 the FBI. Since then Eden, a hacktivist a la Robin Hood, agreed to lend her skills whenever the agency needed them. Now Isaac has taken a case defending a man who claims to be innocent of the charges of murdering his fiancée, and Eden immediately smells corporate fishiness. Against Isaac’s better judgment, Eden begins to investigate and soon what is uncovered might put everyone in danger.

With a subtle note of suspense, this fine story had lots of fun baby-making, caveman outbursts, and funny banter. Eden was a great leading lady: she was smart, sweet and caring. She didn’t like how corporations many times got one over regular people and she put her skills to use to right whatever injustice was overseen. Isaac was the typical obsessed-by-his-woman, grunting, bossy alpha. A great lawyer, his first concern was always his girl’s safety and wellbeing, and I just loved his devotion.

With super hot shenanigans, and sweet cuddling I loved For You, I Will. I do feel the suspense outcome could have been a bit more elaborate…but you know what? It doesn’t really matter that much because I just love me some OTT-obsessed-alpha and their sweet romances.

Rating: 4 “This time we did it” Stars 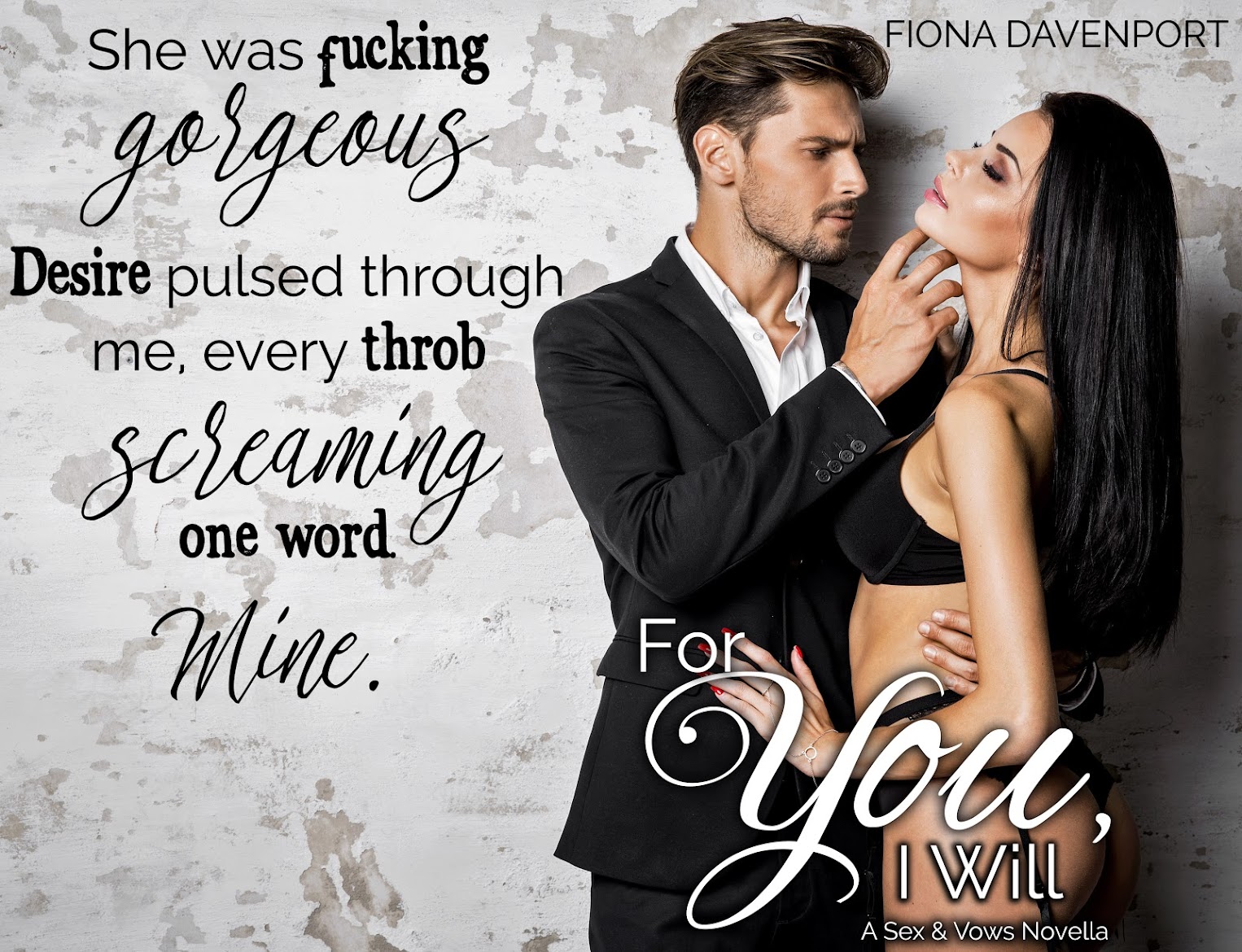 The far off sound of voices floated into the room and Eden sprang up, shoving me away with surprising force. Once she was standing, she looked down at herself in horror, just then realizing I’d ruined her shirt and there was no way to fix it.
“Isaac! What the fuck? I can’t leave here like this. Not unless you want the world to get a nice look at my goods!”

I growled and yanked her body up against mine. “First of all, you’re going to get yourself a spanking if you
don’t watch your mouth, and second”—I leaned down until my face was only centimeters from hers—“no one sees
what’s mine.”

Her eyes narrowed as she glowered at me. “What exactly am I supposed to do? And put that thing away!” she
snapped. My dick was clearly appreciative of the look and feel of her naked tits pressed against my chest. Despite the mind-blowing orgasm I’d just had, he was up and ready for another round.
The voices drew closer so I stepped back, tucked myself back in, and snatched up my suit coat. I held it open for her to slip her arms inside and it engulfed her. She looked so damn cute.
“That’s a good look on you, Eden.”
Jax’s laughing voice came from the doorway and we both spun to face him. Eden’s face was bright red and she shrank down into the coat like a turtle trying to hide in its shell.
“I—um—spilled something on my shirt,” she stammered. Jax’s grin grew to epic proportions and I quickly pushed her behind me and scowled.
“What the fuck do you want, jackass?” I snarled.
“I just came to see if you wanted to grab some lunch,” he explained, leaning casually against the doorjamb. His
eyes glittering with mischief, he gestured to something behind me. “Looks like you’ve already eaten.”
Eden shrieked, and I glanced back to see her scrambling to her discarded underwear. She snatched them up and shoved them in her pocket before turning blue death-rays on me. 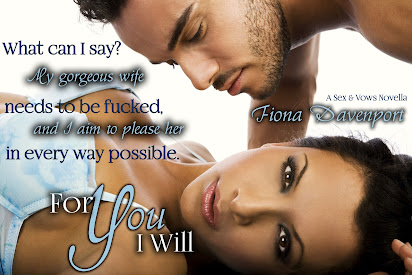 Hello! My name is Fiona Davenport and I’m a smutoholic.

I’ve been reading raunchy romance novels since… well, forever and a day ago it seems. And now I get to write sexy stories and share them with others who are like me and enjoy their books on the steamier side. Fiona Davenport is my super-secret alias, which is kind of awesome since I’ve always wanted one.

CRIMINAL INTENTIONS: Season One, Episode One: THE CARDIGANS by Cole McCade